Objective: to understand and memorize (in abbreviated form) John 1:1-14. (This Bible lesson resource is included in our book Bible Games Explosion.)

When you think of beginnings, what comes to mind? (Receive answers. eg. Beginning of summer, vacations, school, new jobs, etc.)

The Bible records two very important beginnings. Can you guess the first one?
("In the beginning God created . . . ")

The second "beginning" is very similar to the first, and is the one we will learn about and memorize over the next several weeks.

Have children say the following verses one section (Part 1-5) at a time:
(Write verse on board or copy on transparency for overhead projector.)

2) Through him, all things were made . . . nothing was made without him,

4) To them he gave the right to become children of God.

What is a word? (A word---written or spoken---represents a thought or an idea)

The first part of John 1 speaks of the beginning, the Word, and God.

What was at the beginning? (The Word)

What or with whom was the Word? (God)

What do we learn from Part 2 of these verses? (Through the Word---through God---everything was made.)

In Part 4, what happens to those who follow God? (They are given the right to become children of God.)

Finally, what does Part 5 say happened to the Word? (He became a human being and lived on earth.)

Who is this human being? (Jesus, is the Word, and the Word is God.)

Set up: You will need a chair or place marker, such as a Polyspot, for every player, minus one. Arrange the chairs or markers in a large circle. Write the following words from the verse on index cards: Beginning, Word, God, Him, Things, Made, World, People, Followed, Children, and Human. There should be at least two cards for each word. It's ok to have more than two cards per word. Give a card to each player, making sure it has a match for play.

How to Play: Players begin by sitting in chairs or standing on place markers. The player without a chair or place marker stands at the center of the playing area. Teacher slowly reads the memory verse. When players hear their word called, teacher pauses, at which time players race to switch places with another player who has the same word. At the same time, the player standing in the center must run to "bump" one of the players who is switching places from his or her spot by sitting in the empty chair or standing on the empty place marker. The player who doesn't get to the chair or place marker is "bumped" and must go to the center in the next round of play.

Play continues as such until the Bible memory verse is read. If time allows, play again, but first have children exchange cards.

Copy the memory verse (included with purchase) on colorful card stock paper. Cut sections apart, and then tape ends together to make wristbands for children to wear home after each session.

Write Part 2 of the verse on the board; say it through one time.

"Through him, all things were made . . . nothing was made without him" 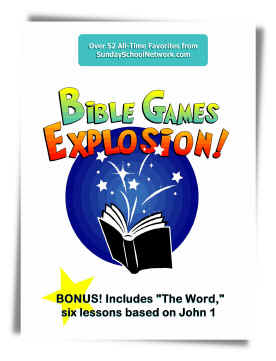 Get the rest of the WORD Bible Game lessons and 52 Bible games when you purchase Bible Games Explosion.


Help keep the site going. Don't miss out on the benefits of Premium Support! Click here!