Pass It On Bible Lesson & Game 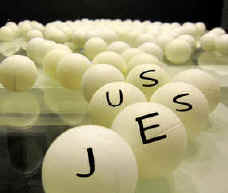 
Set Up
Write one letter from the phrase "Jesus Saves" on each of the team's Ping-Pong balls (one letter per ball). Team lines stand shoulder to shoulder, approximately two feet apart. Team lines stand parallel to one another. Place the box of balls at one end of each team line.

How To Play
Before you begin, tell the players the game they're about to play is called "Pass It On." The object of the game is to pass the balls from the box to the end of the team lines, then assemble the balls to form a two word phrase (show one of the balls with a letter written on it). The clue for solving the phrase is something Christians should want to pass on to others.

Object Lesson
(Optional: Before playing the game have the students name off good and bad news events, and then write them on the board.)

If you knew in advance that something bad was going to happen in your city, what would your reaction be? (Warn your friends, family, neighbors.)

Being saved from sin is what the Bible calls the Good News or the Gospel. What do you think it means that Jesus saves? Saves us from what? Jesus saves us from the punishment of sinning against God (sin is doing wrong things). The Bible says, "The wages of sin is death, but the gift of God is eternal life in Christ Jesus our LORD" (Romans 6:23). The bad news is that sinners, all of us, have a wage due for sinning against God. A wage is something we earn. The Bible says we earn a penalty for sinning. This penalty is death—physical and Spiritual. When we die, we will either be eternally separated from God in a place called Hell, or we'll be united with God in Heaven. The good news is that we don't have to go to Hell. Why? Because Jesus died on the cross to take the punishment we deserve for sinning. The Bible says, "Everyone who calls on the name of the LORD will be saved" Romans 10:13. Jesus knew we couldn't save ourselves from going to Hell. Jesus Saves is the Good News that we need to pass on to our friends and family. We need to warn them about the bad news! Romans 10:14 says, "How, then, can they call on the one they have not believed in? And how can they believe in the one of whom they have not heard? And how can they hear without someone preaching to them? . . . As it is written, 'How beautiful are the feet of those who bring good news!'"

You are never too young to start passing on the Good News that Jesus Saves!

Pray
Dear Jesus, thank you for dying on the cross to save us from our sins. Thank you for the gift of eternal life in heaven. Help us to pass on the Good News that Jesus Saves to our friends, neighbors, and family members. Amen.

*Pass-It On is from the book, Super Heroes of the Bible The Willing Hearts Who Changed the Course of History.